I recently wrote a blog post about giving up alcohol. I had an incredibly frustrating conversation with another developer on Twitter: 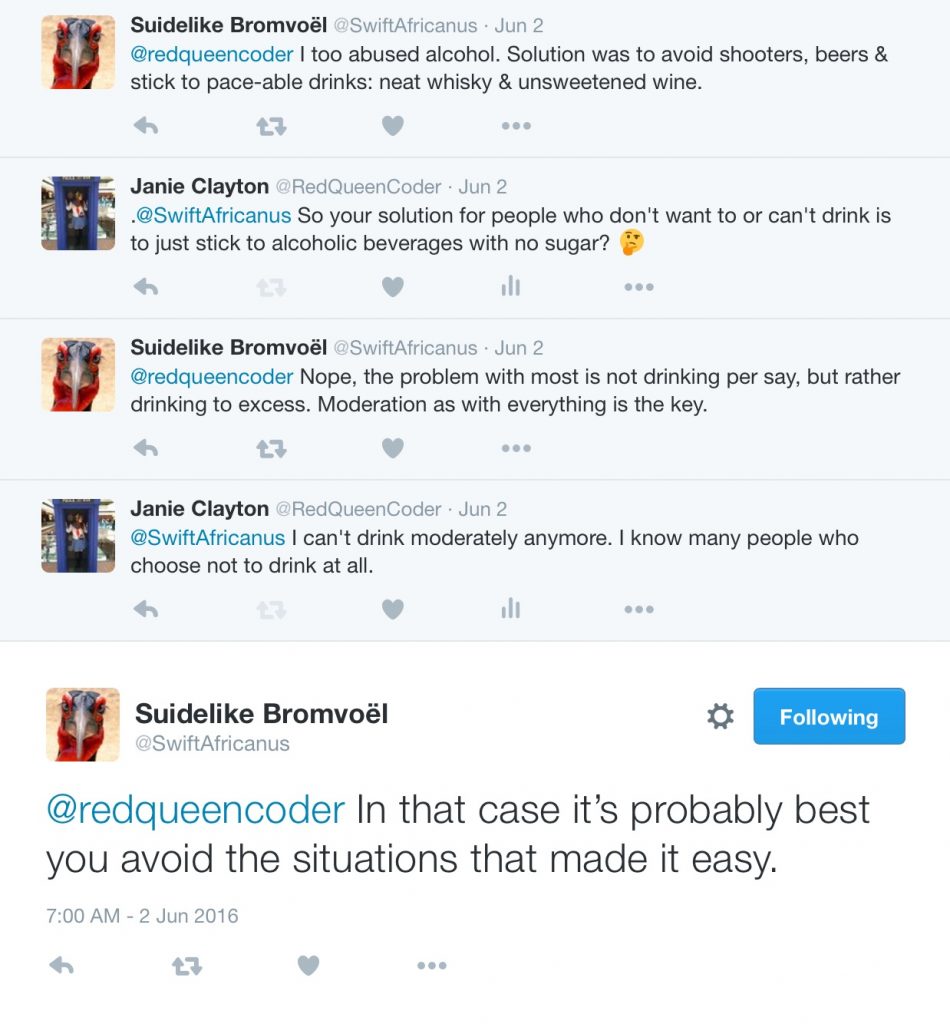 I love the smell of bullshit in the morning.

There is a great deal here that is wrong with our conversation here. This person clearly didn’t read my blog post because I mentioned not being able to drink without becoming violently ill. The issue also isn’t about telling people how to drink in moderation, it’s about the fact that alcohol is incredibly pervasive in the programming community. Would love to see this person telling an ethical vegetarian to just eat meat in moderation or avoid places that refuse to accommodate them and see how well that goes.

I have had multiple official conference events and activities that take place at breweries. It isn’t just deciding you’re not going to go hang out at the hotel bar. There are mixers and parties that are officially parts of the conference. I have worked in places where there is an office liquor cabinet.

At conference parties there will be a clear sign explaining all the wine and beer selections and nothing mentioning anything non-alcoholic. Sometimes you get lucky and they will have Coke, but lots of times there is just water.

Later this developer basically told me that you can’t please everyone. I am not talking about “pleasing everyone.” The fact that it’s assumed that everyone drinks and things are geared around that is quite troubling. There are people who have religious objections, health issues, or are, god forbid, pregnant, that don’t allow them to drink and casually talking about it like it’s a choice, like deciding you won’t eat mushrooms, is incredibly insulting. Also suggesting that if you don’t drink that you should just avoid conferences altogether is yet another example of how we as a community are phasing people out and excluding them. Yay diversity.

Another specious argument was that all non-alcoholic options are more unhealthy than “good” alcoholic options. In spite this person’s claim to the contrary, scotch is not healthy. I agree that juice and soda are full of sugar and no one would claim that they are health food, but neither is scotch. What do you think alcohol is? It’s sugar! Making a claim that having a soda or a glass of cranberry juice at a conference is a less healthy choice than having scotch is bullshit. They’re both unhealthy, but I can drink the juice and I can’t drink the scotch. A glass of juice is not metabolized through my liver. I can drive after drinking a glass of juice. I can take an ibuprofen the next day without jeopardizing my liver. Also, no one is healthy 24/7. We occasionally indulge in something and it would be great to be able to work with people to have less damaging indulgences rather than just saying to go drink water. Telling me what I can and can’t have because you have personally deemed it to be unhealthy is arrogant and presumptuous.

We are programmers. We brag about how great we are at solving problems. We talk big about being disruptive and trying to change the world. I call bullshit on this community that we somehow are helpless in the face of trying to figure out ways to be inclusive to people who do not drink alcohol. There are a lot of ways this problem can be dealt with and just shrugging and saying you can’t please everyone, stay home is not the right response.

Trying to Figure out Replacements

One of the big things that I miss about drinking is not the actual drinking part, but the stuff around it. I miss picking out wine and different flavors of vodka and mixing drinks. I miss using my cocktail glasses. I miss having a process of making things. 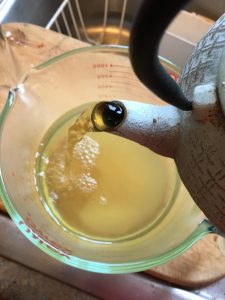 This last part has somewhat been replaced by learning how to cook, but I still miss being able to make stuff for myself.

A number of people suggested I replace my wine with tea. I was resistant to this switch because I already have tea keyed in my brain to work. When I get up in the morning, I go through a ritual where I brew my tea in my cast iron tea pot and pick out my mug and sit down to start work for the day. I don’t want to drink more tea at night when I have been drinking tea all day because it will not let my brain relax and realize that work is over.

I did, however, forget about iced tea. My dad was from Tennessee and the only tea he ever drank was iced tea. He did unsweetened Lipton iced tea, but I have realized this is a possible solution to some of the issues I have had with finding a replacement for alcohol: 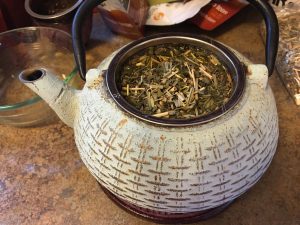 In order to avoid polluting my mind by confusing it about the teapot, I use a different cast iron teapot for iced tea. When I used to work out of the house I bought a second tea pot for work and kept one at home. I stopped using the work teapot because it’s capacity was a little too large and the tea would go cold before I could drink all of it. It brews about four cups of tea.

A while ago I invested in a tea water machine. One of my bosses had one at a previous job and it was always great to be able to just get up and brew tea any time I feel like it. My house’s electric system is wired badly and I can’t heat water for tea if I am using the toaster oven or running the dishwasher. This heater resolves that issue and has resulted in me drinking more tea because it removes a step and makes it easier to do it.

Since I am watering down the tea with ice, I want it to be strong. I have been using three tablespoons of tea. I want to have my tea be fruity, but I also want it to have some of the health benefits of tea. I brew this for at least seven minutes to try and extract as much flavor from the tea as possible before throwing it out. I usually reuse tea that I drink hot, but when I am making iced tea or chai I use the tea once because the second brewing is too weak.

I know it’s terrible, but I have a number of herbal teas from Teavana. They are very strong and if you blend them with a green tea, they add a lot of flavor. I have been using one part herbal tea to two parts green tea. This gives a distinct fruit flavor while retaining the health benefits of the green tea.

I want this to be something of an indulgence without being too unhealthy. I added an ounce of lemon juice and a quarter of a cup of sugar. I check and that is about 190 calories of sugar, which is about fifty calories per cup of iced tea, which gets watered down significantly. For comparison, an ounce of scotch is 64 calories and a glass of red wine is 125 calories.

Trying to do Better

I consider this experiment a success, but I know this doesn’t translate as a solution to the larger problem of having better non-alcoholic options in the programming community. 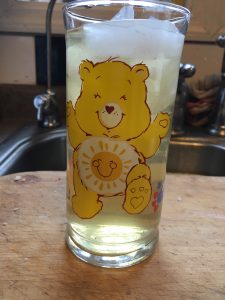 One of the reasons I am trying to do these experiments is to eventually figure out bette solutions that can be implemented within the confines of the system. I know that if I go to a bar with people I can order non-alcoholic beverages, but I would like to figure out a solution for catered events where there is generally wine and beer but not any other creative non-alcoholic options.

Most people don’t do something unless it’s easy. Right now it’s easy to drink alcohol because it’s the default. It easier to just drink wine and beer because they’re the most prominent options and everyone else is doing it. I think if it were easier to make non-alcoholic choices more people would do them and it would make more people feel welcome at these events.