Several months ago I decided to cut back on drinking. Basically I woke up in the middle of the night and just kind of decided I didn’t want to do it anymore.

I have been going to therapy for the last few months to try and work through some issues and sadly my self medication with alcohol is one of those issues. My therapist keeps telling me I am a recovering alcoholic. I dislike that characterization. I think I had a rough couple of years and I drank to numb myself and escape my problems. That might be the definition of an alcoholic, but I still dislike the characterization.

I thought I could just cut back to a normal amount, but since I gave it up I can’t drink without becoming violently ill. I blew a conference talk because I was suffering from severe illness after a night of drinking with my friends. At NSNorth I drank wine at dinner (and didn’t even go through all my drink tickets) and was so violently ill the next day that I had to spend several hours curled up in a ball on the floor in the corner because I couldn’t stand up without a great deal of nausea.

I have somewhat accepted that I probably can’t drink anymore. I am trying to adjust to a life without alcohol. Since I have abstained from it, there are a bunch of things I have noticed that I wanted to share.

When I was younger I wanted to be Marion Ravenwood. I loved the scene from Raiders of the Lost Arc where she drinks the guy under the table. I loved that she didn’t put up with anyone’s shit. I thought she was awesome.

I found a lot of alcoholic role models in my young adulthood. Lucille Bluth. Dorothy Parker. The characters in Mad Men. 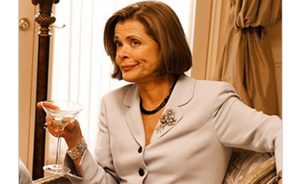 I’m fabulous and will not put up with your shit.

Alcohol, especially whiskey and other hard liquors, is very masculine. I would try to impress guys by ordering scotch and whisky drinks. There is some feeling of power that comes with ordering whisky. You feel like Don Draper or Peggy Olson. Laymen drink beer. Executives drink scotch.

It can also be very feminine ala the emergence of the Cosmo from Sex and the City. It was fun to go to the bar with friends and hold a pink drink and be girly in a large group of men.

I feel like I lost part of my identity. I know that it was not good for me. I gained twenty pounds since I started programming and most of it is from alcohol.

I keep getting emails from cruise lines trying to get me to book a cruise. If I can’t spend the whole cruise drinking then what’s the point? Why does anyone else even go on a cruise if not to have an excuse to drink at 8:00 in the morning??

For a long time I had no idea how to spend the hours between when I finished work and when I had to go to bed. I realized how boring nearly all of my activities were.

I miss the taste of it. I miss the relaxed feeling I got when I had the first drink. I miss going to the store and looking at all the different options I had for wine, liquor, and hard cider. I miss trying new stuff. I miss the glassware. I miss feeling like a grown up sophisticated person and not just a hermit from rural Wisconsin who hides in her house with her pugs and her programming books.

Which leads to my next observation.

It’s weird to me about how big of a part of my life it became. I never drank in college. I went to one beer party and drank soda and didn’t even process that I should want to drink alcohol. Considering I went to a party school in Wisconsin, that’s rather remarkable.

I didn’t have any sanctimonious reasons for not drinking. I just didn’t like the way it tasted. I saw my classmates drink whole bottles of vodka in an evening and black out and not remember what happened the next day. One friend broke her ankle and didn’t remember how it happened and I had to try and help drag her to the campus medical center while she tried to keep herself from throwing up from alcohol poisoning. I didn’t understand what the appeal was of doing this.

I also wasn’t really social in college. I spent most of my evenings in my dorm and later my apartment watching DVDs and doing cross stitch projects. I never really had friends or a community, so I just kind of kept to myself and it wasn’t part of my awareness.

It was probably telling that the first time I ever got drunk was at my bachelorette party. I didn’t drink until I got married. Most of my social activities with my husband revolved around alcohol. We went to dinner at hipster bars with Prohibition-era cocktails. We would go camping and drink around the fire.

I am not totally placing the blame on him. I embraced this lifestyle. I would push to go to certain restaurants over others because I liked their drink menu best. I kept drinking after he moved out and we got divorced. I just remember that most of the good memories I have about being with him revolve around drinking.

I also noticed that most of my social activities are severely curtailed without drinking. Most of my friends brew beer and make wine and mead. They spend their nights at bars playing games. A friend of mine keeps telling me I should move to a more expensive place downtown so we can randomly go to the bars on the spur of the moment and go out drinking with him.

There have been a lot of conferences I have gone to that have social activities at breweries. I was always annoyed that most of these places didn’t have wine, but they also didn’t have non-alcoholic options either.

Me at my heaviest. I would prefer not to stay here.

I am thinking back on all of the conferences I have attended over the last two years. There are open bars with wine and sometimes cocktails but I have no idea what, if anything, they had that was non-alcoholic. They probably had mixers like cranberry juice and Coke. I am not blaming organizers. I know that it’s far more common for event caterers to just have wine or beer packages for events. I am not going to be pissy because organizers don’t make sure there are things like mocktails or better dry options. I am just saying it’s something that has been so pervasive in the fabric of the conference scene that it is like oxygen. It’s just there. You don’t think about it or notice it until you can’t do it anymore.

I have never been pressured into drinking. I have been the one pushing the whole “let’s all drink right now!” bandwagon. That was wrong. I would like to try and rectify some of the passive damage I have contributed to our community.

A lot of the conversation we have in the programming community about alcohol abuse tends to revolve around the possibility of sexual assault. It is an insulting argument that puts pressure on women to abstain from alcohol to avoid being raped. It also is like a parent who will take the ball away from everyone just because one person is being a jackass.

We’re getting better about talking about mental illness and I would like that to also include how we talk about and deal with alcohol. I would like there to be better and more prominent choices for non-alcoholic beverages at conferences. I would like people to think more about what they are doing rather than just grabbing a beer because it’s there and it’s what everyone does.

We’re all self medicating from punishing crunch times and crippling impostor syndrome. It’s an escape from the pressure we’re putting on ourselves to avoid having to confront any of the very real problems that we have with how we deal with stress in our community.

We, as young adults, don’t seem to have healthy social outlets for socialization that don’t revolve around drinking. I understand that it lowers inhibitions, but I feel like I can’t go out and do anything socially because I don’t want to drink.

I am not trying to be sanctimonious and tell people not to drink. I just would like people to have some awareness of what they are doing rather than just treating it like oxygen. Now that I can’t drink I am seeing lots of things I never noticed before and it worries me.